Between autumn and winter there is often a type of weather that lasts a few hours or as much as several days. This pause between the seasons often accompanies the big storms that spin off the Atlantic and bring snow, or rain, or wind, and often all three.

When one of these rain storms ends in early December it leaves a landscape that is very wet, and because it is wet all the muted colors of autumn yet to be covered by winter are made vivid, much as a stone taken from a brook is before it dries. The greens of mosses and hemlocks are rich and quiet, as are the browns of dead ferns and leaves. None of the creatures that usually inhabit the land are to be seen. They have gone south, are hibernating, or being very quiet. Soon after the rain stops the cold comes from the north and freezes all the water that has yet to find a stream and a fringe of icicles appear on the eaves, often to stay all winter. 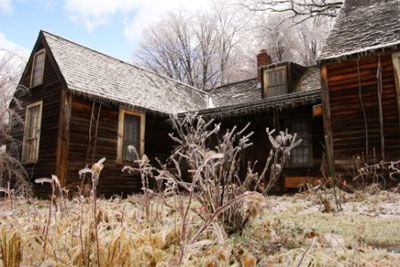 The gate that opens onto the lane behind Tasha’s house is weathered and flecked with lichen now. It swings to the east and rests against a large stone that keeps it from opening too far and springing the hinges. Past the gate against the north wall of the barn is the iron manger. The impatiens and pansies that inhabit it in the summer have given way to a spray of balsam tips. After the cold weather frosted away the green of summer, Tasha invariably placed the ends of balsam branches into the manger. A wreath appeared on the back door and also on the post holding up the bird feeder. Packages began to arrive in the mail with increasing frequency. Indoors the fireplace was always lit and herbs picked earlier in the year dried overhead on a beam. The cat retired for the winter to the top of the cupboard, while the corgi Megan kept watch on the back doorstep for squirrels. 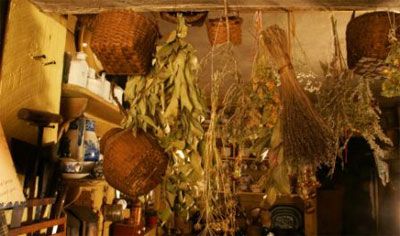 November and December have been cold, and now even at noon the sun is low to the horizon where it shines through the windows and farther across the floor than at any other time of year. The contents of the woodshed are beginning to shrink rapidly. The old timers of New England felt a wood supply should be not less than half gone by the beginning of February, and this was a practical philosophy Tasha adhered to, for as Christmas nears and the cold sets in, there is no better time of year to sit by a fire, think about the past, and look forward to a new year. 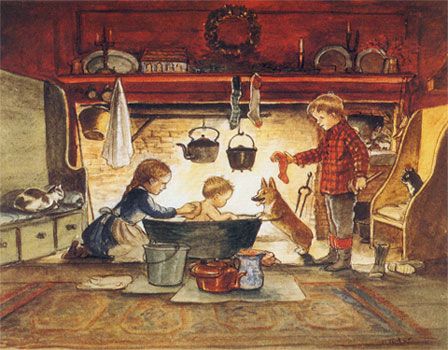