Our hollyhocks have been in the family for seven generations. This strain was handed down from Tasha's great-grandfather Frederic Tudor. He lived from 1783-1864 and was known as the Ice King who, after many trials and much ridicule, amassed a fortune by creating a demand for iced drinks in warm locales. 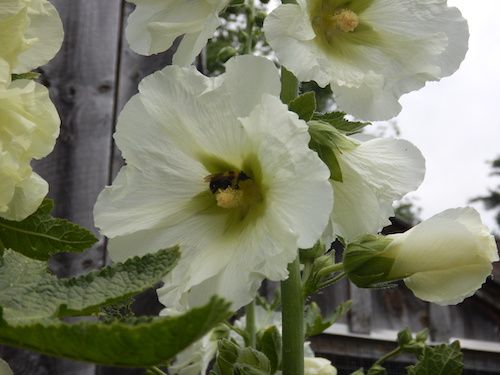 Many hollyhocks are biennials, that is they bloom their second and final year. However, our hollyhocks are considered short-lived perennials. They will bloom during their second season, then for another 3-5 years. If you'd like to prolong their lifespan, prevent seeds from forming by cutting down the stalks after the bloom finishes or cutting off each spent bloom individually. Since they bloom over a four week period, the latter method might be more effective. 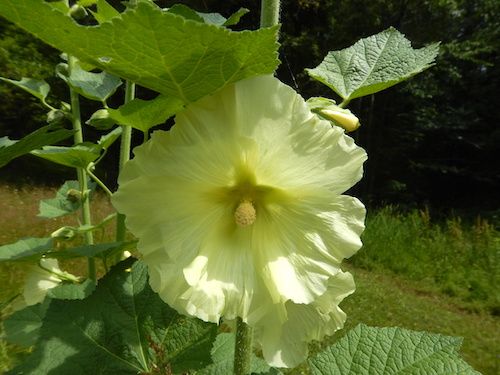 If you allow the seeds to remain, your hollyhocks may self-seed. They have a decided preference for the front of flower beds though we love them in the back due to their height and their scratchy seed-heads. Hollyhocks like well-drained, fertile soil with full sun (over five hours a day.) Like many broad-leafed plants, the hot afternoon sun will wilt their leaves, something Tasha remarked upon as a new development in her later years. She blamed this upon 'homo sapiens' and our disregard for the natural world which she felt altered the climate. 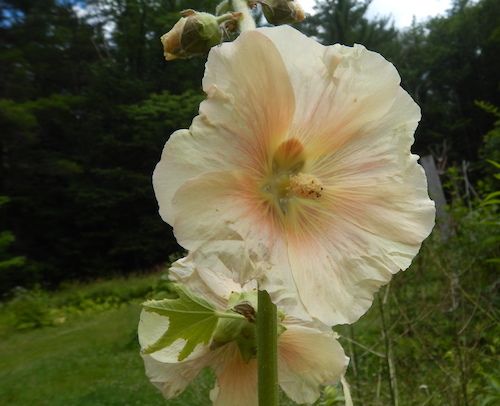 Our seeds are gathered from a variety of plants with different flower colors. If we were trying to produce and collect certain colors, we would use a cheesecloth or muslin type fabric as a bag over the flowers and use a q-tip to manually self-pollinate a plant with itself.

Since we leave our plants to their own devices, we cannot predict what flower color the seeds will produce. We separate the seeds from the chaff manually and try to mix the seeds before packaging them so as to get an assortment of colors in each pack. 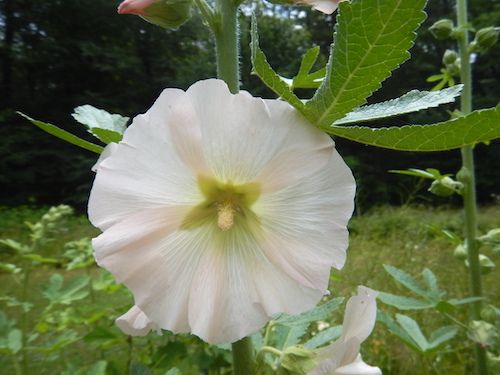 There are many ways to start seeds. Here in Vermont, we like to start them inside under grow lights in April or May. Use a freshly opened bag of fine seed starter mix. Since hollyhock seeds are fairly large as seeds go, you may use pro-mix instead of the finer seed starter mix. If you are reusing seed trays, do try to wash them with warm water and soap (or diluted bleach) to get rid of any lingering bacteria. "Damping-off" is always a problem for us as we don't have good air circulation. Keep the soil moist but not sopping wet until the seed emerges. Then remove any cover you may have been using. With our woodstoves, the air in our house stays quite dry and we use plastic covers during the germination phase.

After a few weeks, plant on to a bigger container as the roots are rather picky about being disturbed. If you have a protected spot in the garden and the soil has warmed to summer temperatures, you can plant them out at this point, but shade them from the strong sun (10am-2pm) which they won't be used to. In Vermont, we always pot them into bigger pots as it's just too cold for the little dears until late June or so. Then we must watch out for dog paws and curious chickens. Hollyhocks are also a favorite of endearing (but hungry) porcupines. 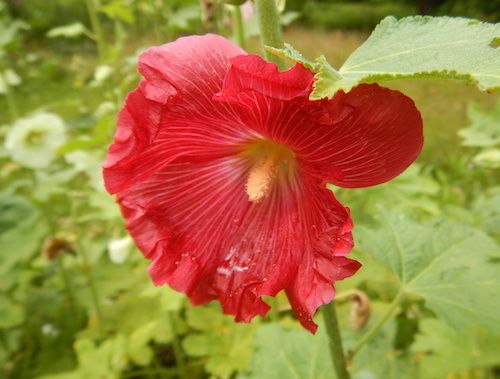 While it is possible to move a first-year self-sown hollyhock, do so early in the season. Even when young, Tasha would replant the hollyhocks, then snip off all but one or two of the tiniest leaves. This saves the plant from having to try (usually unsuccessfully) to draw up and deliver water to the thirsty leaves. Tasha would also use a half-bushel basket to shade them during the hot hours of the day for a week or so. As you practice this, you'll learn to recognize a certain kind of wilt that means you've killed the plant. Never a fun sight, but part of the learning process. 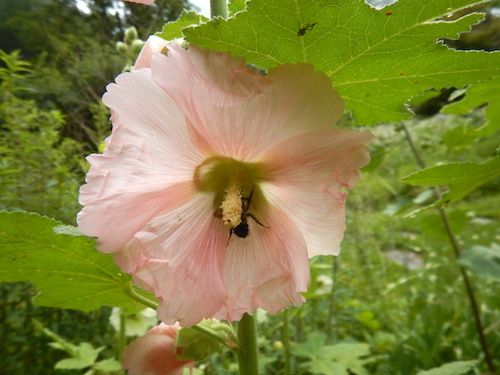 As an old-fashioned plant, hollyhocks provide good food for our pollinators. Japanese beetles love them as well, but we only get a few here in the colder hills and are able to pick them off by hand. The buds and blooms make lovely little hollyhock dolls. 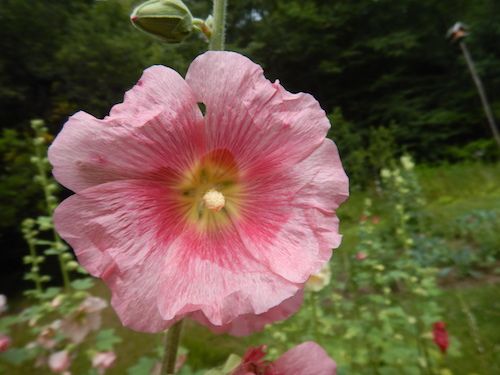 We are honored to continue the line of this unusual plant and are rewarded each July with its spires of blooms. If you have any questions about getting your hollyhock seeds off to a good start, we're happy to help with any questions you might have.