We recently came across the statement “Classic children's literature teaches audiences of all ages the truth about the world and human nature.” Do you think this is true? Let's take a look at the Octobers of long ago through illustrations from four of Tasha's books; Pumpkin Moonshine (1938), The New England Butt'ry Shelf Cookbook (1968), Tasha Tudor's Five Senses (1978)  and Around the Year (1957.) 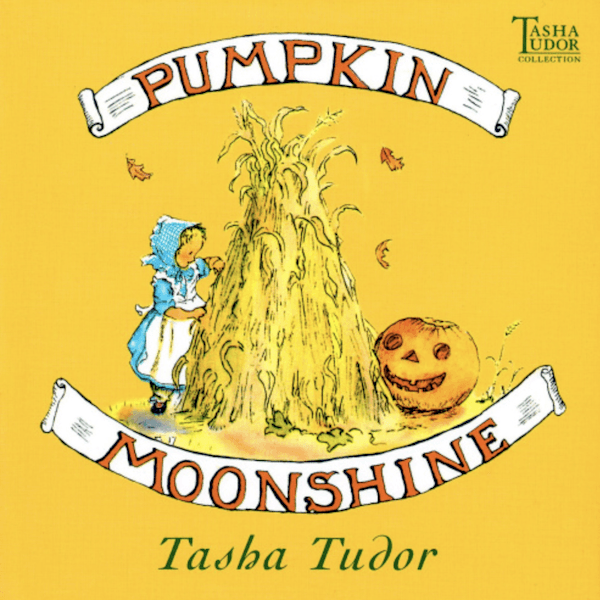 Pumpkin Moonshine is available in hardcover, board book and paperback in our online shop.

A Bit of New England Halloween

Pumpkin Moonshine contemplates the excitement of autumn, pumpkins, adventure, and how children experience tradition. It was originally published as a very small book, and was one of a series of five referred to as the ‘calico’ books. Due to the diminutive dimensions of the volumes, bookstores experienced heightened incidents of the books departing from the premises without payment. Later editions were much larger! 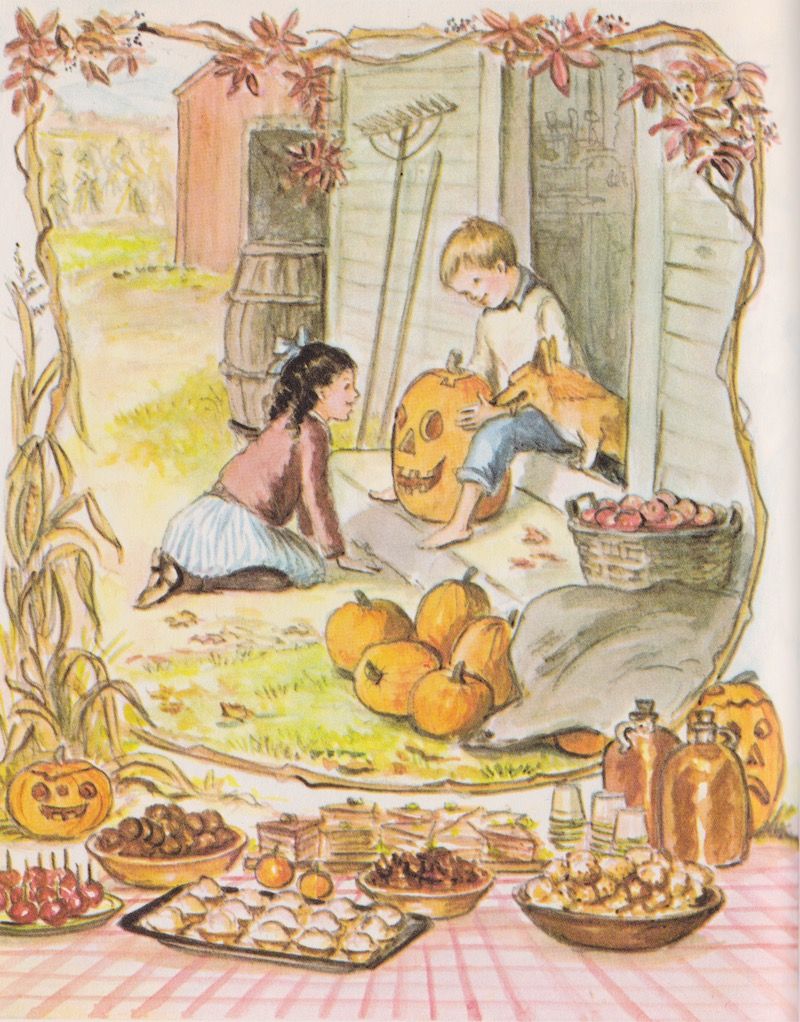 The New England Butt’ry Shelf Cookbook possesses recipes and observations valuable to anyone involved in the process of day to day cooking and baking. This illustration documents two young children carving a "pumpkin moonshine" Tasha's name for what many people call Jack-o'-lanterns. Notice the wooden hayrake, the wooden water barrel, the basket full of apples.

What would this scene look like today? Would the boy be wearing shoes? Would the dog have a collar and dog tag? Most children I know love to carve pumpkins as much as the two children pictured showing a universal truth. This book is now out-of-print but used copies can be found for aficionados of New England recipes and lore.

Mary Mason Campbell, the author of this book, writes “Hallowe’en is many autumn things, none of them very spooky. Not that we have no ghosts. A ghost lives in our house who wouldn’t scare a youngster if he could help it. Once or twice, when he has turned himself into a bat, he has given some of the grown-ups a few bad moments. He only does this when the butt’ry window has been left open at night and it’s his way of showing how careless we can be.”

“Hallowe’en is the last of the flowers in the garden, as the chrysanthemums and calendulas bravely outlast all the tender blossoms. It is gathering in of the pumpkins and squashes and putting the gardens to bed. It is frosty nights with brilliant starts and sometimes a cold north wind to remind us to put on storm windows. It is raking leaves and filling the woodbox. It is building a fire in the cookstove to warm the kitchen in the morning. It is making gingerbread and baking apples and planning the mincemeat.”

“It is time to fill the butt’ry cooky and candy jars and to make the sweet cider. It is time to decorate the barn with cornshocks and with scooped-out pumpkins and funny-shaped squashes with cutout faces of leering goblins and with black cats and witches on broomsticks. It is the time to frost pumpkin tarts with whipped cream and to caramel apples on a stick and to fill the wash tub with water for bobbing Macs. It is the time to get into the attic trunks for costumes and to start the record player for square dancing and choose your partner, line up here for the Hallowe’en party.” 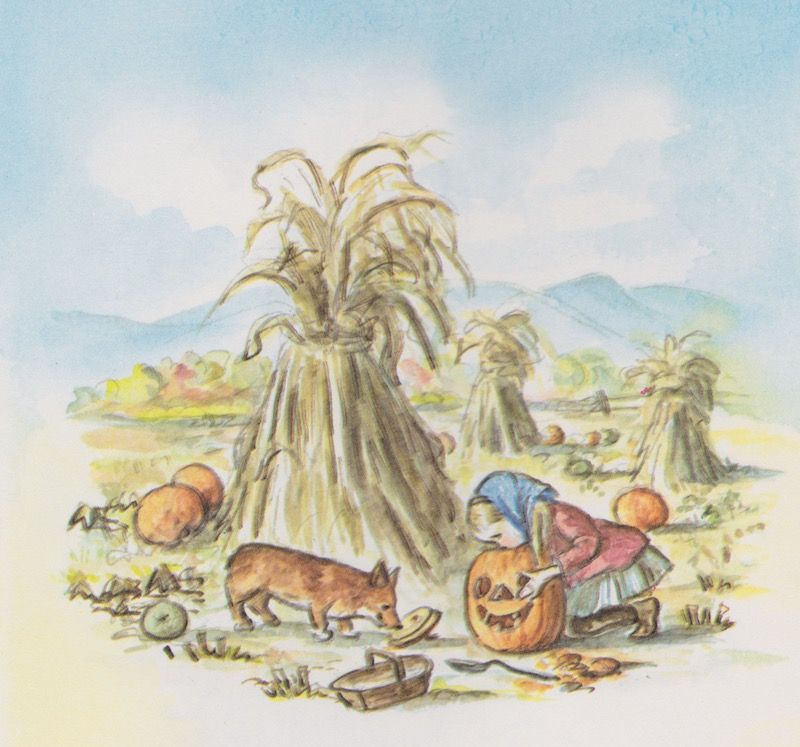 The Five Senses by Tasha Tudor

In The Five Senses, we see a young girl putting a candle in her pumpkin moonshine. Notice how she's finished scooping the seeds and pulp out and has left that in a pile on the ground. Will she leave it there so that the many seeds can grow into plants and create more pumpkins to be carved into pumpkin moonshines? Notice how the corn is tied into shocks, common at the time but not something you see since the advent of harvest machinery and larger farms. One wonders if the child is alone, but of course she isn't, her corgi is there to keep her company. She's wearing warmer clothes in the fall chill, very similar to those of the child in the second illustration, though they were made years apart. 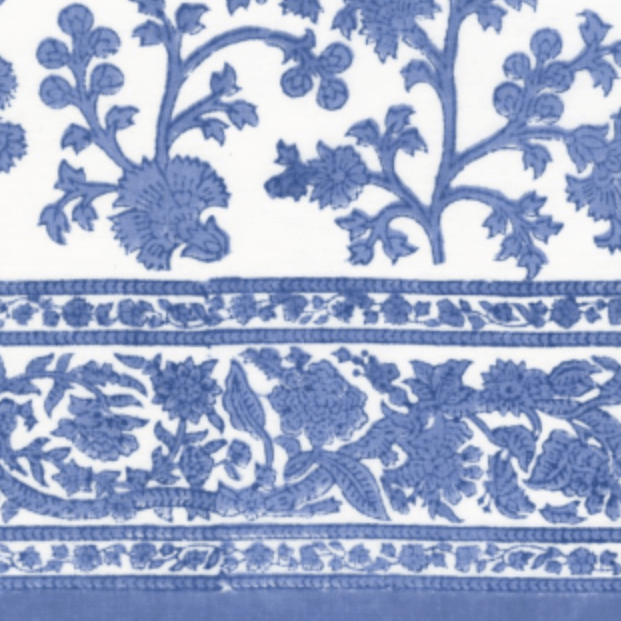 Like the child in the Five Senses illustration above, Tasha always wore a scarf over her hair plus a second around her neck. We offer these for sale in our online shop. 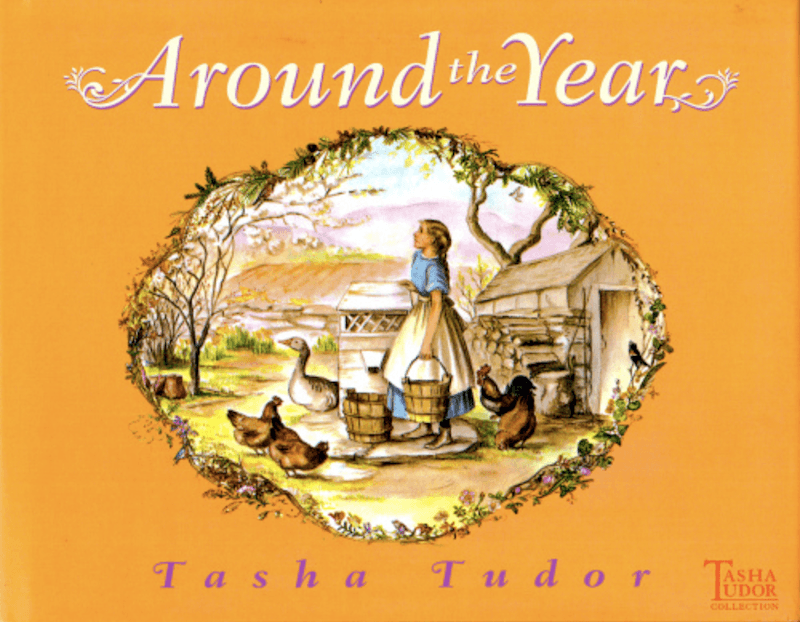 Around the Year is available in hardcover and paperback in our online shop.

Around the Year by Tasha Tudor

The fourth book, Around the Year is another favorite of young and old alike in that adults love the illustrations and seasonal celebrations, and children love being read to. This book is a treasure trove of the traditions of both historic 19th century life and the very similar life Tasha and her family lived in the mid-20th century. This image shows a fall town fair with vegetables and flowers on display for judging. 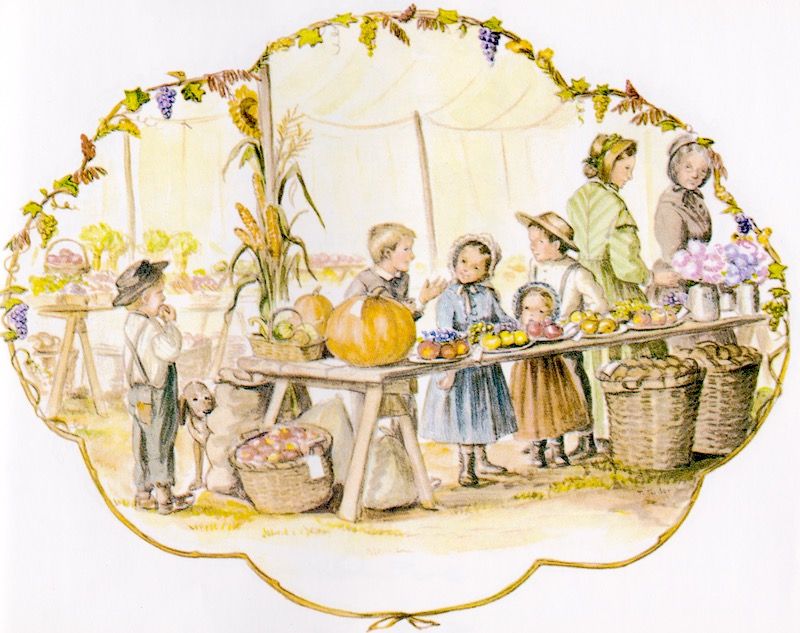 The book has retained its original size over the many decades it has been in print. The main difference between recent print editions and earlier is the former has but one large image on the front dust jacket, while the latter has four separate images depicting the respective New England seasons. As Tasha drew from the immediate world around her, it seems reasonable to believe the beautiful watercolors in this book are of scenes and circumstances she encountered while creating it. To this day, a great many of the objects in drawings Tasha did eighty years ago are yet present in her house in Vermont. 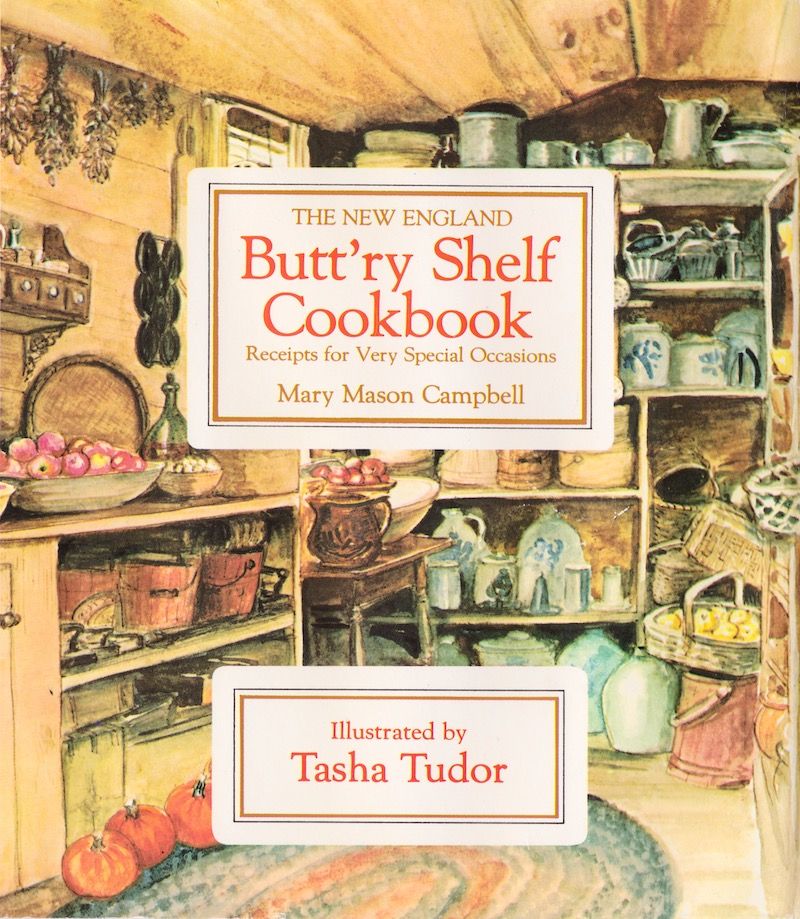 It is interesting to consider that Tasha made these books at different stages of her life. Pumpkin Moonshine when she was in her early twenties, and The New England Butt’ry Self Cookbook when she was older, and a mother. One of the great delights of Tasha’s artwork and writing is seeing both her technique and what she observed evolve through the years and decades of her long and fulfilling career. 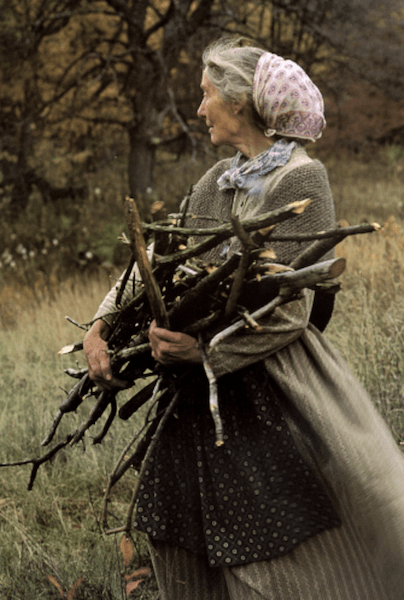 This portrait of Tasha Tudor by Richard Brown is available in our online shop.

One of Tasha’s delights was creating pencil or charcoal drawings. She was especially effective in this medium, and those books in which such illustrations are present deserve particular attention. Many of her earlier books were created when her four children, all born in the 1940s, were quite young. In some illustrations, one wonders if Tasha baked the food seen in the oval wooden bowls, made the cider seen in the glass bottles, and collected the apples in the baskets. Always busy, it is probable that Tasha planted the apple trees from which she later picked the apples!