To the north of Tasha’s house where the bee balm blooms red in the summer and beech leaves rattle in the winter wind sits the old birdfeeder.  It rests atop a cedar post about six feet high, and has for many years, been the center of activity for chickadees, blue jays, and red squirrels. It was even used as a scratching post by Tasha’s one-eyed cat Minou, who preferred canned sardines to birds. The feeder is a six by fourteen-inch platform with wooden sides six inches high on each end and a glass roof, and there are even two narrow strips of wood running the length on each side to keep the birdseed from blowing away. 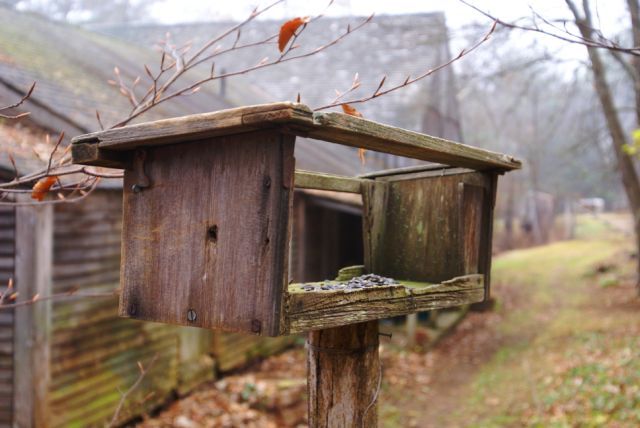 The birdfeeder is not too far from the window beside which Tasha sat during the winter months when she did much of her drawing.  Except for one unusual windstorm that blew the glass top away, the years have wrought little change.

Tasha kept the birdseed in a large, blue wooden barrel with a hinged top just inside the hen pantry, and often got up from her drawing to replenish the feeder. She could see the birds from where she sat.  The chickadees recognized her through the window. They would fly to the windowsill and make those small cheeps that chickadees do, to remind her to bring more sunflower seeds out if the occasion warranted.

Occasionally a red squirrel would lift the barrel lid and rattle around inside, but Tasha kept a brick nearby to weigh the top down, and that worked most of the time. Tasha used an old enameled scoop, that was once the top to a small double boiler, to carry the birdseed to the feeder and during severe storms when the birds were numerous and particularly hungry she also scattered the seed around the back doorstep.

During such weather, the snow often drifted in and covered the hen pantry floor with a fine layer of snow. In their quest for errant seeds, the juncos and sparrows invariably hopped in and left a lacework of delicate tracks behind. 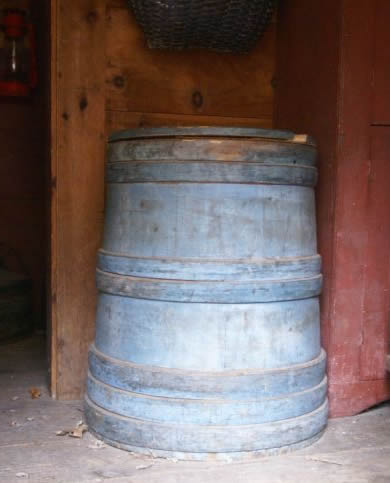 Tasha’s corgi Megan liked to lie on the back step and watch for visitors, and to keep an eye out for squirrels as well. The chickadees seemed unconcerned and would perch on Megan if it was convenient. Many of the birds that frequented the feeder were very friendly and did not hesitate to land on one's hand if there was a sunflower seed there. Late in the winter afternoons before tea Tasha and Seth often stood outside the back door for a few minutes and watched the chickadees come to their hands. Chickadees can live for as long as twelve years, and many of the chickadees that Tasha fed are still in her gardens and surrounding woods.