Corgis Return to the Tudor Homestead

It gives us the greatest pleasure to announce that corgis have returned to the Tudor homestead, this time in the care of Marjorie Tudor, Tasha's daughter-in-law. Read on for a look back at what corgis meant to Tasha and for a look forward through the eyes of two nine-week-old puppies.

Afternoon tea was part of Tasha’s daily routine. A corgi by her side was as necessary as a teacup in her hands. Her corgis gathered by her feet and her side in part, it is true, because she fed them bits of crackers and cheese, bran muffins, and thin-sliced ham sandwiches. But the corgis also enjoyed the camaraderie of teatime and were sure to be involved throughout.

Above: Rebecca and Owyn train their puppies as to the proper procedure for keeping a lookout. Image available in a card set, Corgi Family Portrait.

Tasha’s corgis were always busy, keeping an eye on her and people visiting her. Her last three corgis, Owyn, Rebecca, and finally Megan, usually posted for lookout duty on the back step. They lay with their short legs on the threshold, ears, and eyes alert for imminent visitors. The problem with this arrangement was the back porch obstructed the view of the driveway, from which most action arrived. They would gallop out to the gate every now and again, squeeze under the bottom-most rail, and have a good look down the field. Nothing! Back to the house they’d go to let Tasha know nothing was going on and to ask for a treat. Finally, someone would show up, and Tasha would know long before they knocked on the door or called out a cheerful “hello!” 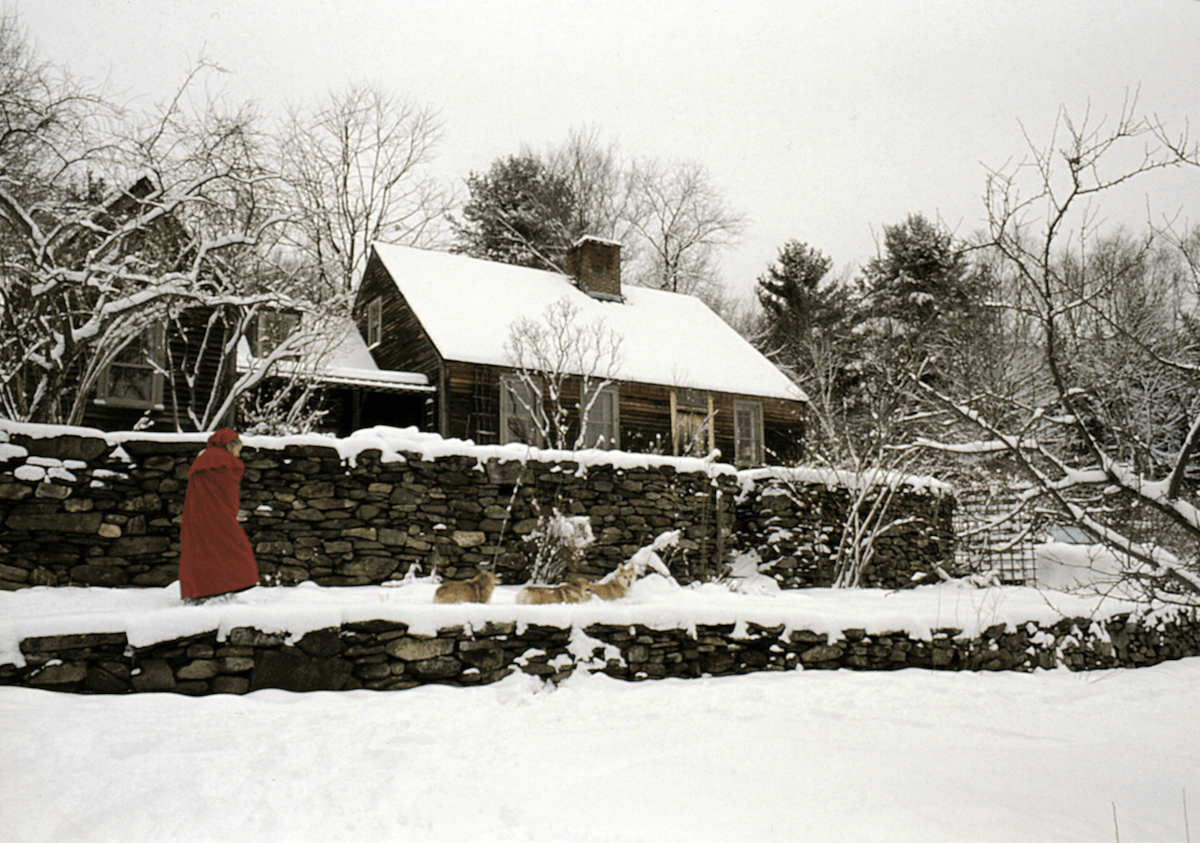 Above: Tasha walks through her garden in winter as three corgyn race ahead. This Richard W. Brown photograph can be found in Tasha Tudor's Garden or in a blank card set.

Corgis are small, with short legs, pointed ears, and an active disposition. All this is helpful when groups of people gathered in Tasha’s house, for the corgis were able to be underfoot yet seldom in the way. Also, the corgi that had not indulged in too many treats would often spring onto Tasha’s lap as she sat with her feet propped up on a chair. This Tasha only did in familiar company. 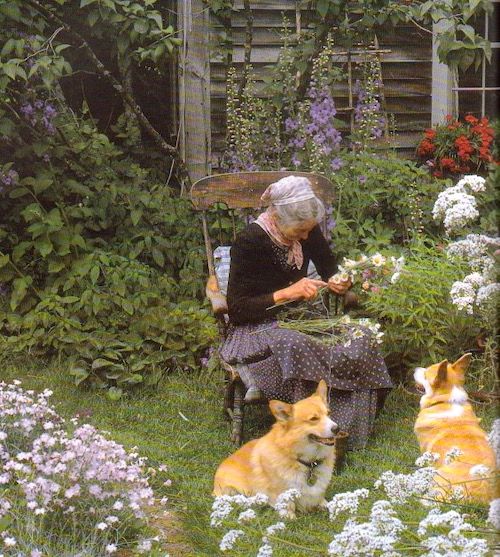 Above: Tasha makes a bouquet or floral crown on the upper terrace while Owyn and Rebecca look on. This Richard W. Brown photograph can be found in Tasha Tudor's Garden

When Tasha gardened, her corgis kept an eye on the bulbs that went into the ground in autumn; and the roses she planted in spring. “You’re squashing a nice peony!” Tasha would cheerfully reproach Owyn when he did such a thing. But all in all, corgis coexist well with gardens. 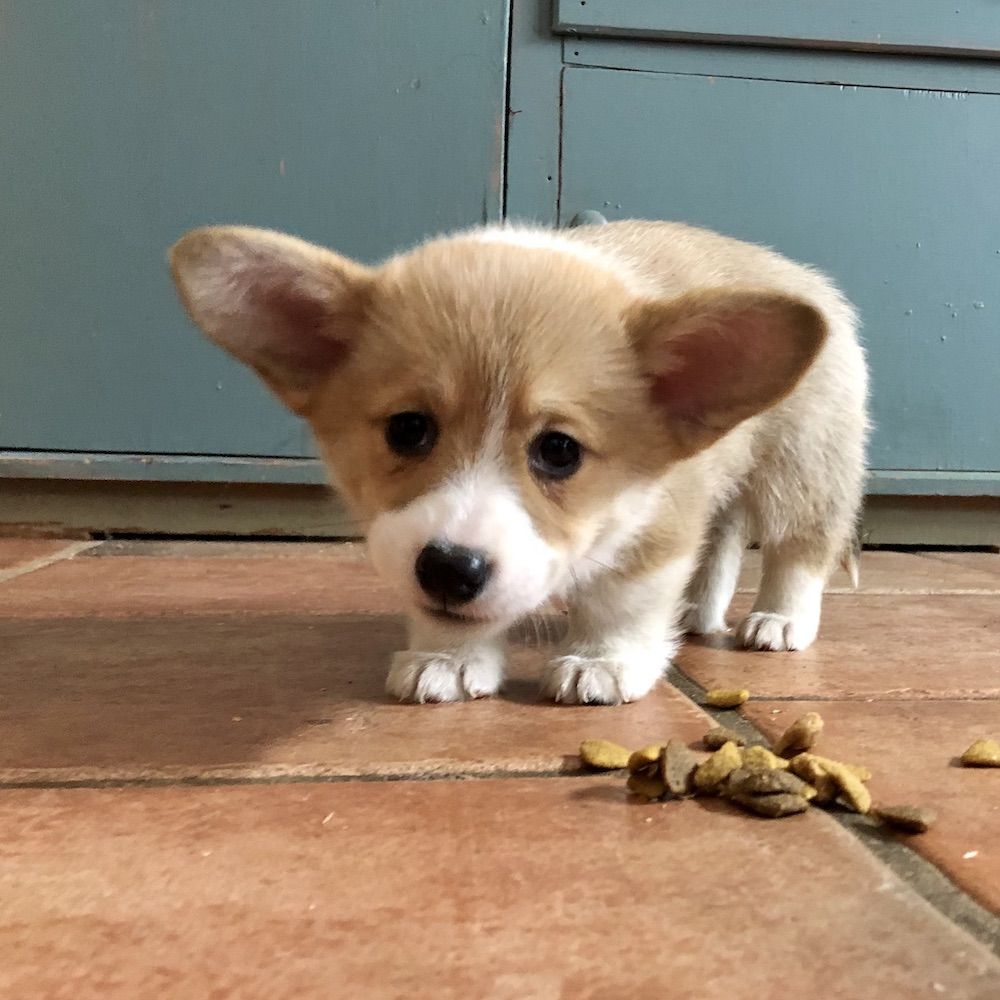 Now, let us introduce you to Bella. When we met her, the first thing she did was to say 'hello' to everyone and donate lots of kisses that never reached our faces. Then she had a friendly wrestling match with her brother Paddington and won despite the fact that she is much smaller than he is. Then she trotted over and decided that it was her mission to get behind the curtain for no particular reason.

Everyone sat down to tea and the next thing we knew she had squeaked under the dog gate and was trotting into the next room. Someone jumped up to apprehend her and to her dismay, she found herself deposited back where she had started. But by then, she knew that there must be some way under the gate and did not give up the whole rest of the day. 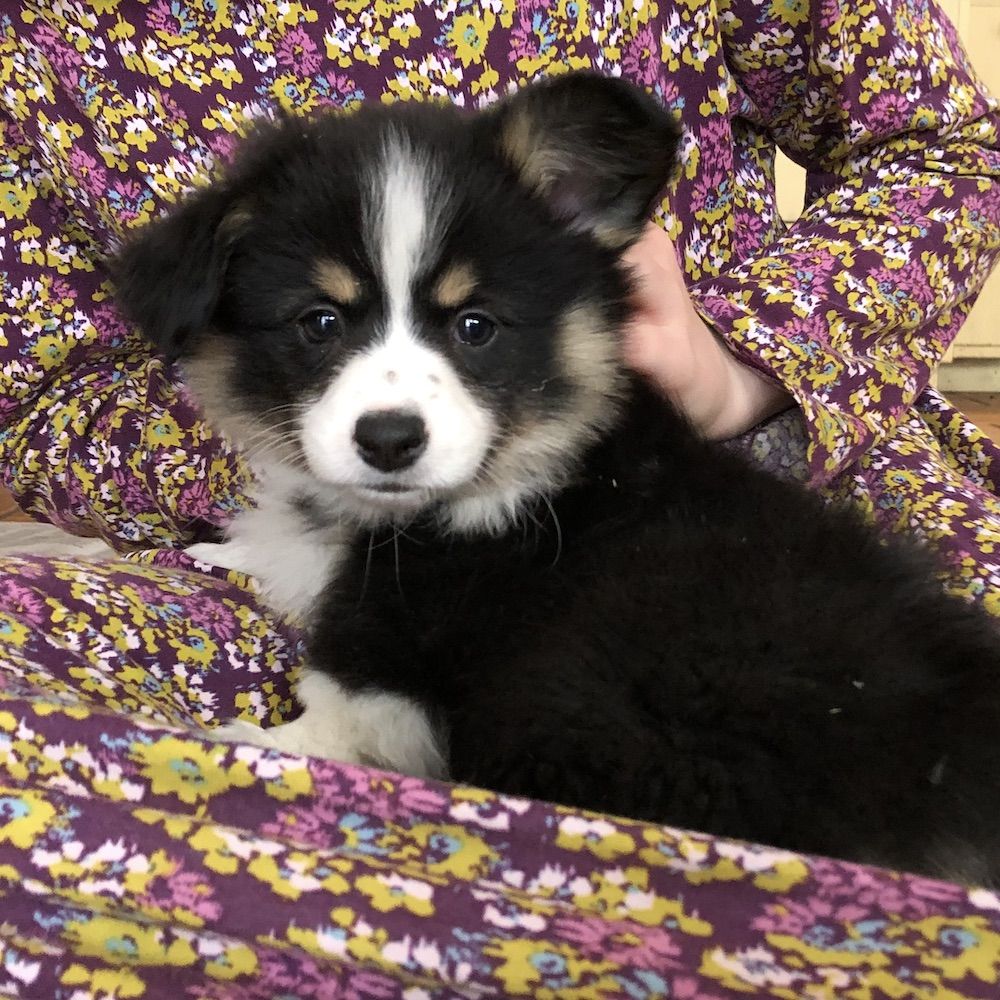 When Paddington first got the chance to explore, the first thing he found was a bowl of food. He immediately started eating it and when we tried to take it away from him he launched forth with a fierce puppy growl, still eating all the while. We laughed together over the return of corgis and their particular ways. When a chair was moved, the noise alarmed Paddington and sent him scuttling to shelter in a lap. But he kept his eye on the frightening chair. Then he noticed that Bella was drinking out of a water dish and he hurried over to claim the discovery which sweet Bella did not mind.

Then he lay down, very worn out with the day's events, and stuck one of his back puppy paws out behind him, a corgi habit Tasha referred to as 'broiling.'

We are so very pleased to welcome two new corgi puppies to the homestead.  We are eager to see how their personalities unfold. Will they love berries like Tasha's corgi Rebecca? Will they be singers? We will report back on their personalities as they grow. In the meantime, give any corgis in your home an extra biscuit in celebration!