Tasha is well known for her love of corgis. In describing them she said: "Corgis are not unlike foxes, except for short legs and no tail. I believe they are enchanted. You only need to see them by moonlight to realize this."

"In 1958, a young Pembroke Welsh Corgi arrived from Great Britain to live with Tasha and her family; the puppy was purchased by son Tom while he was temporarily a student in England. Although Tom had bought the male Corgi for his own, “Mr. B.” became so attached to Tasha (and Tasha to him!) that the Corgi stayed with her for the rest of his life. Numerous Corgis—up to a dozen at any given moment—were to follow, as Tasha decided that she would always have those “beloved” and “smart” creatures in her life." (Excerpted from Jeanette Chandler Knazek's article.) 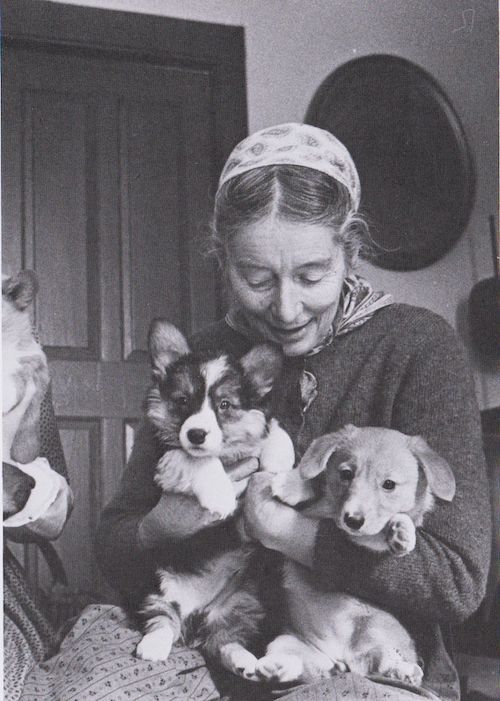 Above: Tasha holds two Pembroke Welsh Corgi puppies at her home in Vermont, 1972. Photo from the out-of-print book Drawn from New England.

The Illustrator of Corgis

Tasha first introduced corgis in her voluminous body of Christmas card work and soon they were seen in much of her work. Later, in 1971, she wrote the first in a series of three books, Corgiville Fair and this book has remained in print since. It was followed by The Great Corgiville Kidnapping (1997) and Corgiville Christmas (2001). 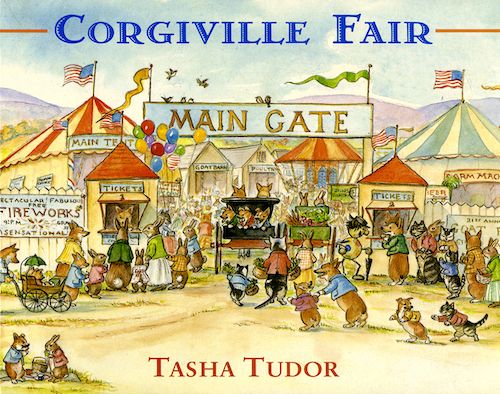 Two of their offspring from a circa 1992 litter; Franklin and Jefferson, lived next door with Seth, Marjorie, Winslow, and Benjamin Tudor. 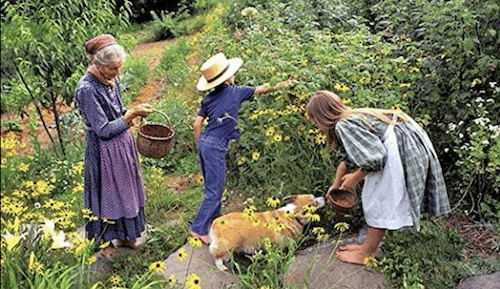 Above: Rebecca joins in the berry picking. She was known for her fondness of blueberries. Photo by Richard W. Brown.

Tasha preferred Pembroke Welsh Corgis, but would occasionally feature her friends' Cardigan Corgis in her work, most notably in Corgiville Christmas. In Welsh, corgi means dwarf dog which refers to the breed's short legs. They are a herding breed and their small stature makes them difficult for livestock to kick and injure. Tasha also identified with the Welsh breed as she was of Welsh heritage.

Corgi is pronounced 'kor-gee' (same as 'glee' but without the 'l'.) Tasha referred to more than one corgi as 'corgyn'.

Tasha fed her dogs dry kibble topped with ground beef and cottage cheese. Though small in stature, corgis have large personalities. They usually prefer to be in the middle of all things. Like all herding breeds, they are intelligent and need some kind of job as well as lots of exercise. If you live in a cold climate, never fear, the copious amounts of fur shed by corgis will serve as additional insulation in your home.

Hidden underneath the red tablecloth of Tasha's beautifully set tea table was a dog bed. Snugly placed between the trestle legs of the table, it was a favorite corgi nest. 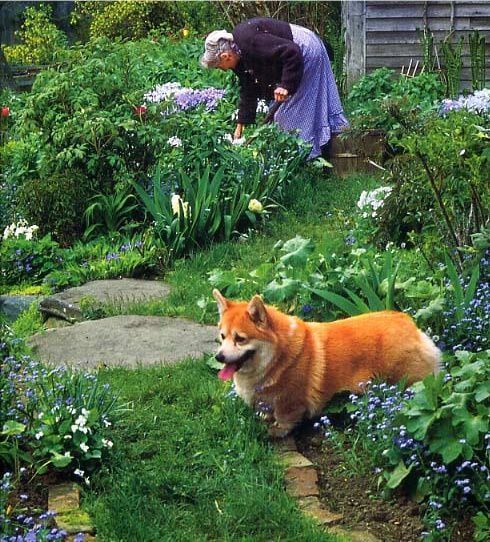 Above: Megan helps in the upper terrace of Tasha's garden. Photograph by Richard W. Brown.

While we have no count of exactly how many times Tasha drew a corgi, we know that many corgi lovers began their love affair after seeing them in Tasha's work. We enjoy seeing and sharing photographs of your corgis and have a special Corgi Corner devoted to sharing here on our website. Consider submitting a photo using this form. 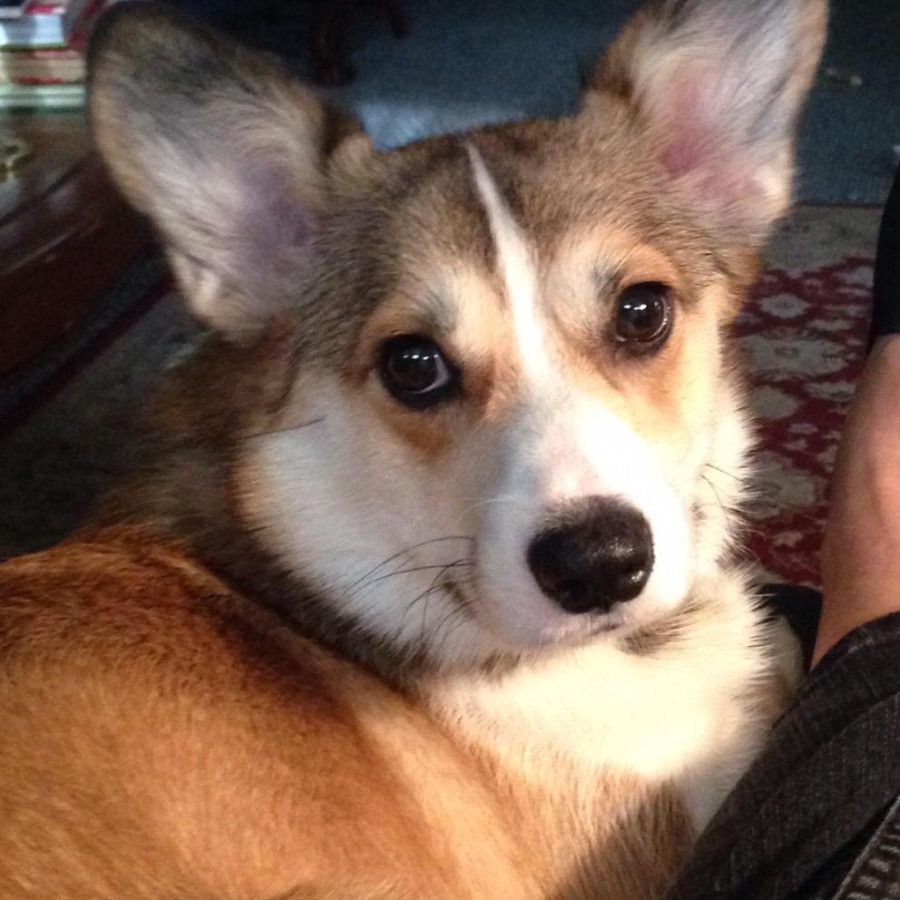 Above: A picture from the Corgi Corner section of our website. Jan from Kansas says "This is our new little Cadi. She is full of life and loves her toys, walks out on our meadow and herding her cat sister Gracie."

Some special magic is on the way to our property! We'll be sharing more details soon, but our last few posts on Facebook and Instagram have certainly hinted at what's to come in our sweet homestead. We all celebrate the things that brought Tasha joy and the way she shared that joy with others. Oh so soon a piece that has been absent will bring new life and excitement and we can't wait to share it with all of you. 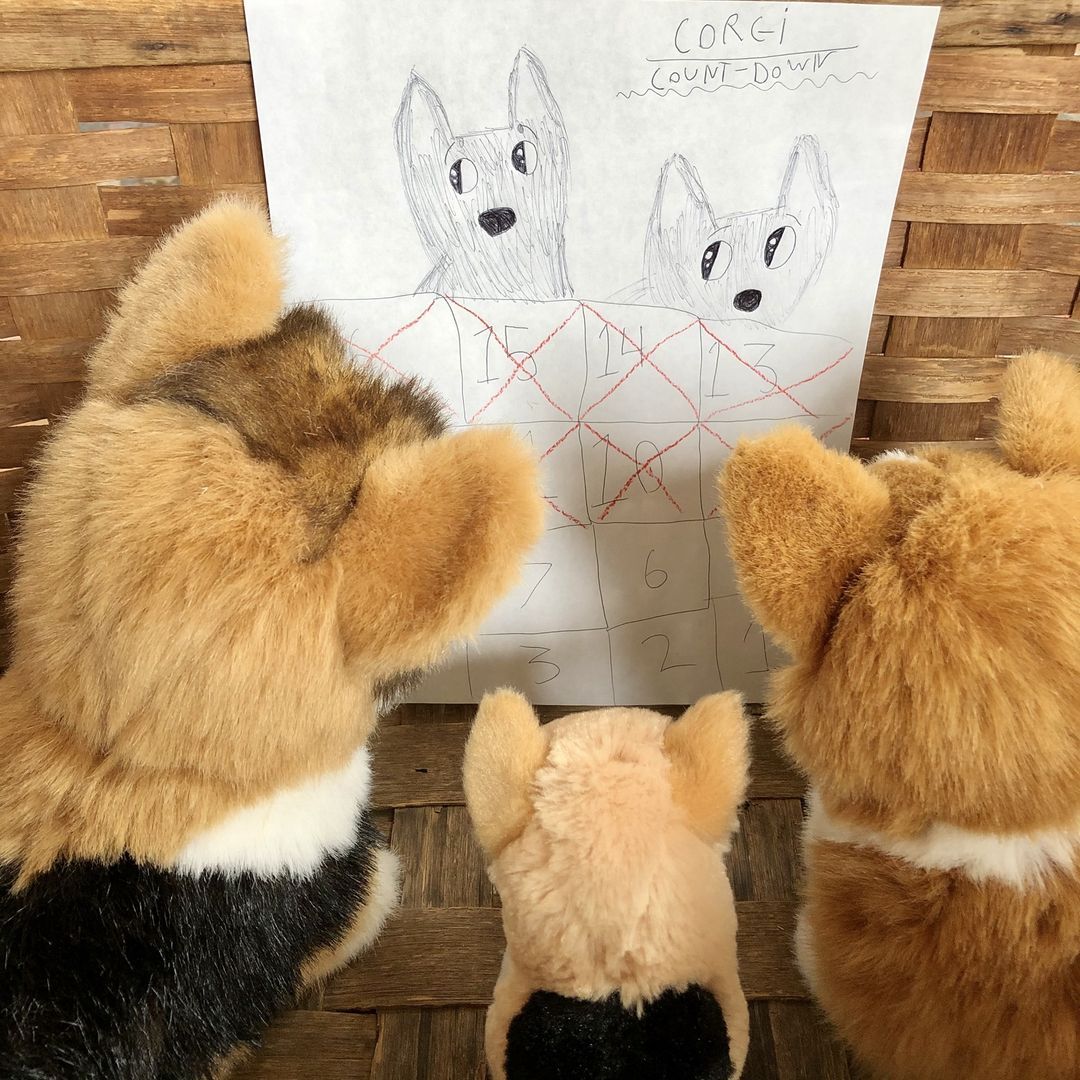 Above: Tasha's great-granddaughters Ellie and Katie are counting the days until a certain event comes to pass.