Though the snow is on the ground spring is near. The trees are budding against the full moon, and the days are longer. Yet spring in the hills of New England is relative. It is near, only in that it may be seen from afar, rather than not at all.

Between the end of October and beginning of March no significant snow fell on the gardens, leaving the ground almost entirely bare. The foxgloves required an insulating layer of pine needles. Just south of Tasha’s bedroom, the campanula seem unperturbed by the vagaries of New England weather, hidden as they are beneath the soil and close to the foundation. 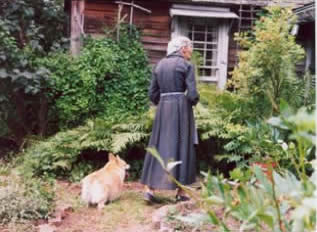 Tasha outside her bedroom one fall

Spring’s last frost visits as late as the first of June, but more often, early in May. Between now and then there is much for a gardener to do and anticipate. Vegetable seeds need to be started in the greenhouse soon, particularly tomatoes, for it is hard to wait until late summer for them to ripen. A six week early start makes all the difference, and is worth the work involved. 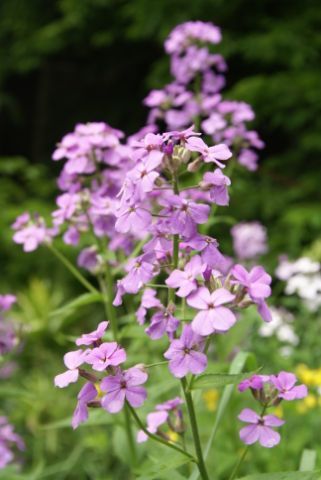 Many of the perennials in the gardens begin their journey from seed to midsummer splendor in Tasha’s greenhouse, while an even greater number self-seed, arriving unexpectedly in the walkways. Tasha called them volunteers, and let them grow where they were. Most of the perennials in Tasha’s garden, from the columbine and campanula to the sweet rocket and sweet cicely, exist in profusion. 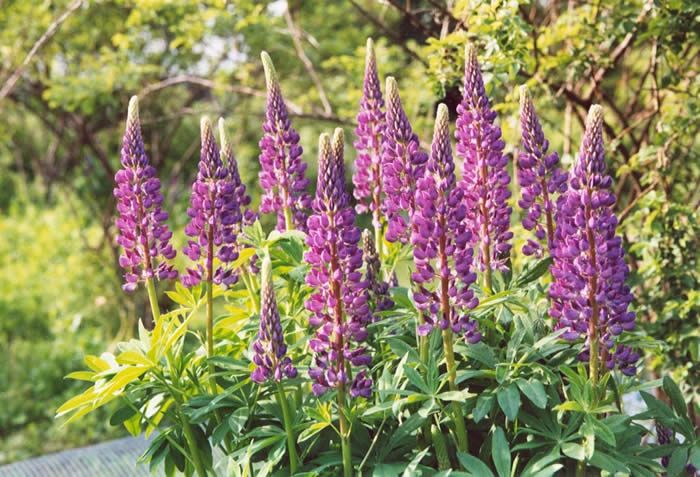 The domain of the lupine is in the field and along the sandy lane leading to the gate, but they find a way into the perennial beds and are now in quantities around the mystery rose. Tasha was especially fond of hollyhocks, forget-me-not, and lettuce poppy. Below the herb circle, she cultivated a bank of hollyhocks, beloved by bees and visitors alike. Behind the house in the secret garden, the forget-me-not turned the ground blue in spring.  The campanula grew in the upper terrace close to the front porch where Tasha could see them during tea. 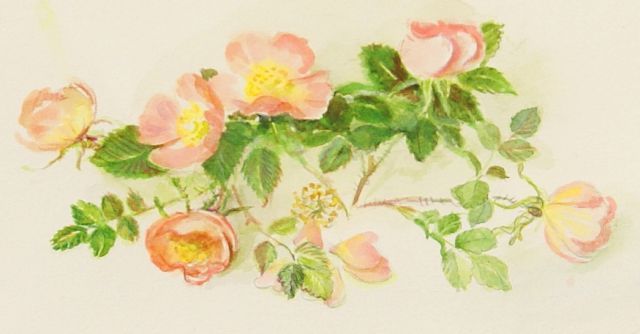 This is the time to get firewood for next winter, clean out the birdhouses, and plan for gardening season. While Tasha often said she did not plan her gardens, she did prepare, sometimes years ahead, but, more often, prepared this time of year when spring was near.

Lovely, old birdhouse in the garden

Tasha said, “Some people call this a cottage garden, but it’s just a good messy garden. There’s no plan. It’s not like painting. I just stick the plants in. I like large quantities of blooms all jumbled together. Reine de Violette roses, thalictrum, Artemisia, iris, pinks, clematis, peonies and forget-me-nots. I like flowers in real abundance. If you have just so much money, spend it all on one variety and make a big splash.” 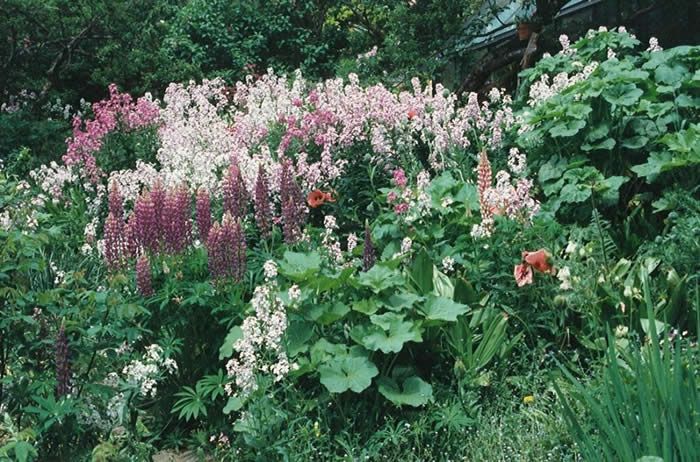 For many years Tasha Tudor and Family has offered perennial and annual seeds from Tasha’s garden. Though the selection has varied over time depending on the weather and crop outcome, the process of preparing, collecting, storing, sorting and packing has not. 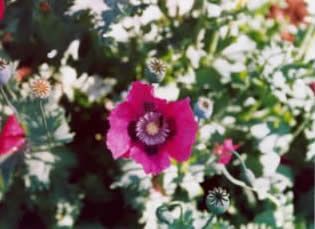 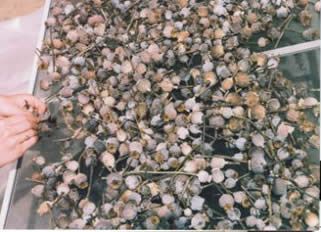 Poppy heads dried and being hand-cleaned 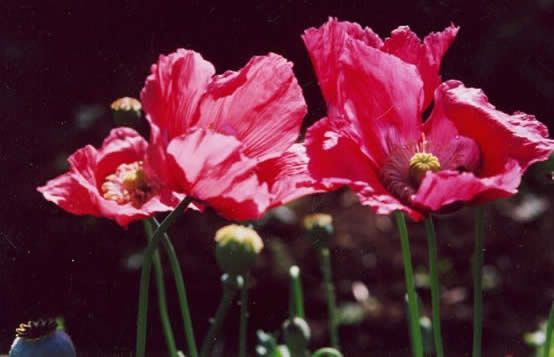 One of the delights of gardening is the awareness that comes over time of how decisions made in prior years have a significant impact on the future. The hollyhock crop has lessened gradually the past few years due to weather. Beginning last year, the core planting of heirloom hollyhocks was stabilized and hundreds of seeds collected, allowing for restoration of the bank below the herb circle this year. Likewise, the lettuce poppy has returned to its prominence in the terraces south of the house, and in keeping with Tasha’s tradition of mixing perennials with her vegetables, the lettuces, broccoli and tomatoes will undoubtedly share their space later this year. 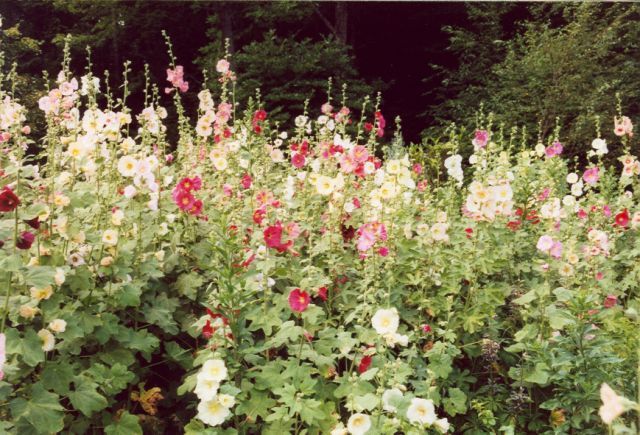 Hollyhock bank below the herb circle circa 2000; scheduled for restoration in 2012

A dry late summer or early autumn day is ideal for seed collection. The lupine rattle in their husks just so when ready, and after a basketful is collected, we spread them in the sun on top of a large screen by the seed drying shed. Years ago we learned a second screen needs to be placed above the first, for lupine pods twist as they dry and with a crack not unlike popcorn on the stove, fling their hard black seeds some distance away.

Many other seed varieties are prepared in a similar way. After drying, sorting and cleaning forget-me-nots, we return the seed pods to the area they grew, for a certain quantity of seeds remain in the plant even after harvest. They self-sow readily, and are to be found throughout the gardens in spring. Forget-me-nots are the most surprising seeds to collect, for after screening and removal of chaff, there appear to be only a few seeds collected. Closer inspection reveals hundreds. 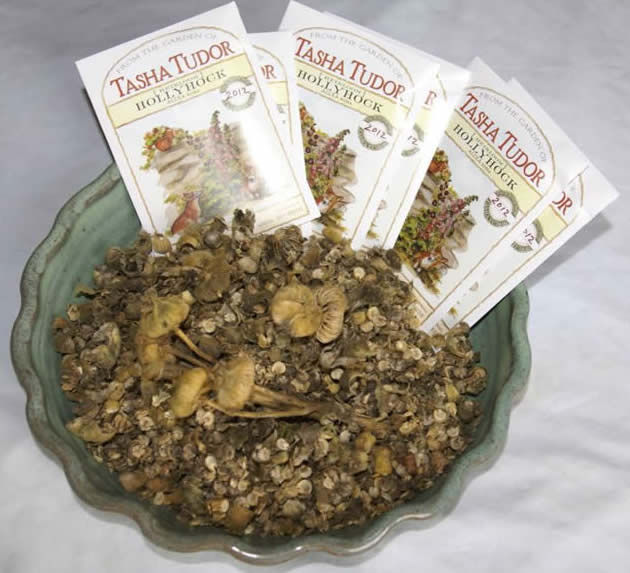 Although seed collection and preservation involves a lot of time and work, it is a treasured tradition of ours, and one of the more important and satisfying aspects of gardening at Tasha’s. The sale of Tasha’s Heirloom seeds helps preserve her garden, her plants, her home, and by extension many of the traditions that have defined Tasha’s art, and life. Find a selection of Tasha's Heirloom seeds and other garden-themed items here!